Notes from the Underground
Or rather letters from the rat hole, (Maulwurf)*. 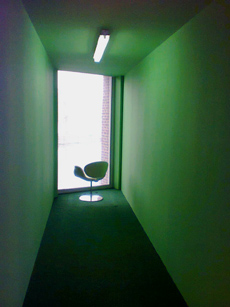 I had promised myself to certainly go and see the other part of the ‘reciprocity’ double bill Sart-Tilman (Liège) and Gouvernement (Maastricht) Vortex-Cortex by Djos Janssens... just a few days to go but I made it and it was worthwhile. The Gouvernement itself is another one of those design statements which on the one hand seem reasonable but on the other quite an infringement, if not to say onslaught on the surroundings... Somewhere between brutish industrial landscape integrated reminiscent of bygone town fortifications it sits on a pleasant part of the river once lambasted by industry... Bonnefanten a stone’s throw away.
It’s a government building and Djos Janssens uses the existing flavor of a discreet design welcome hall to separate (temporary isolation he calls it) out a few elements: chair, view, ambient colour. Wooden walls enclose a short green corridor to the plate glass window – modified by green film save for two eye-holes and a text by Baruch de Spinoza (Ethica I presume, but would have to check) – it works: mesmerized by the weeping willows on the waters edge, considering what Baruch said, and screwing one’s eyeballs to the plate glass window to compare natural and green beauty – while on the other side a soundtrack is offered along with a slightly less endearing view... but all the same perfect pitch to get away from the office even if only for a little bit... 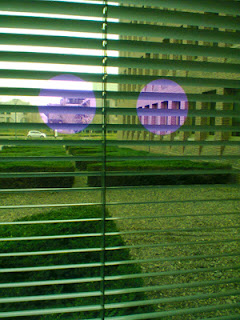 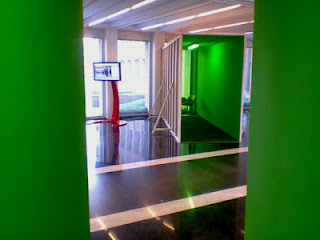 In Dutch... even though they like to bandy French around in these parts (Ceramique wijk, where porcelain once reigned...) The English commentary on the outside of the crate-structures were perhaps a bit too... could have been discreetly added like shipping info instead of big block letters... seen as normally Djos likes to include nearly unreadable text... and confounding at that; but one does not see them immediately, which is a good thing.

It works well, and in fact it is quite essential to view both parts of Vortex-Cortex to bring home the constant oscillation between the headstrong willingness and defeatist enjoyment of pondering a simple thing such as the river going by or a cloud. We are confront ourselves with the irritating tendency to undermine our own integrity...

Speaking of which: (quick liberal translation texts: it pertains to the way of reason to view things in a different point of view from eternity.... and   for to which measure an image is connected with more things, more causes can be conjured...) 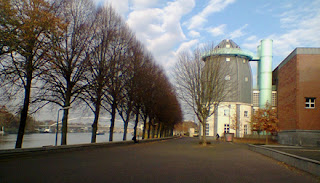 Onward then to the east, where they were destroying the remnants of a historical forest in order to dig coal... halfway to Bonn, where I had to be... but this time I didn’t go into the museum (as I didn’t to the Bonnefanten (couvent des bonnes enfants) either – since the David Lynch exhibition (SoMeOne in My House) was not until the week after... and in Bonn the only show that sort of intrigued was the Flanneur – but I was doing enough of that myself... so I found myself staring into the abyss at Niederzier/Altdorf, near Oberzier where I used to enjoy a ride through the forest on my way to Bonn... a couple of years back I was involved with some fringe activities to COP21, big meet where people talk about saving the planet but don’t... and at the time (Ende Gelände) thought they would never get that far... The idea of shutting down nuclear power stations- in itself commendable- to fire up old coal plats is idiotic... more so, the Chinese are now marketing their old technology with great success... Serbia for example... we are going backwards and I don’t get it any more... So here are the Germans, with Die Grünen in tow, destroying age old forest & habitat to dig up Braunkohle, the dirtiest coal you can find, to offset shortfall by nuclear exit... talk about undermining... 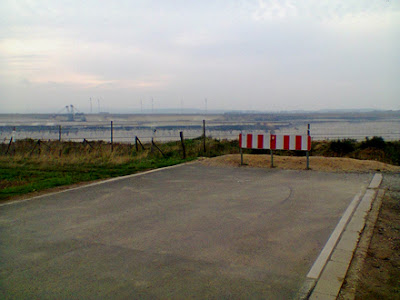 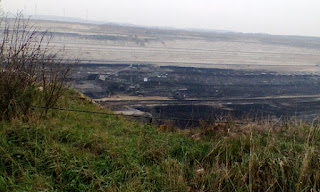 ende Gelände, not as proposed an end to open cast coal mining,
but an end to the green leafy habitat which protesters tried to save... 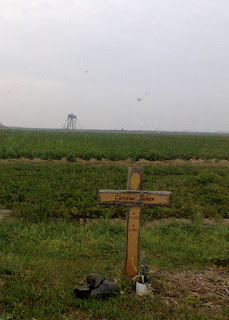 Popgo advertisemant /Maulwurf
Yes on a lighter note I could not help seeing Denis Tyfuss’ss exhibition at Middelheim as a sort of secret strip-mining activity... The massed flocked to see the snot-nose aesthetics of an aleatory combination of yuk-yuk and rumpled noses... while he ups the finger in the general direction of a hand-wringing public claiming to find his work wonderful, beautiful, fun and deep, he shoots tennis balls at his own and friends counterfeit locked in gravel and adorned with Rasta goldilocks... has people pay to produce their own booklets and blow hot air into commercially available advertising irritation, resulting in a dance macabre everyone finds well found... 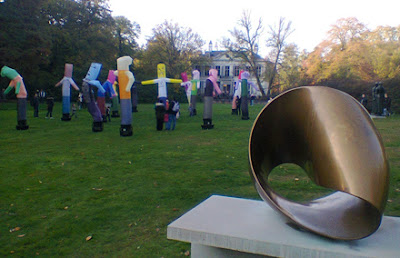 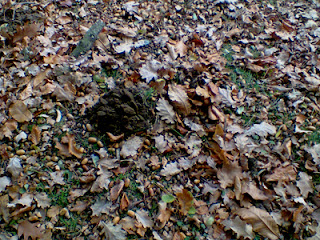 Sitting on a park bench (with advertisement) watching the punters excitedly scurry about I noticed a slight movement in the leaves... and after a while saw the mole hill grow, all the while the park was full of fools that never saw a thing... I thought of the bravery of such a mole, (Maul Wurf, jette-geule (taupe) or throw-gob)  digging away blind in the dark risking to be squashed at any minute by an unconcerned foot above... Thinking that is what Dennis is doing, burrowing right through the artworld and it’s affectations without a care in the world... that is a rarity nowadays... 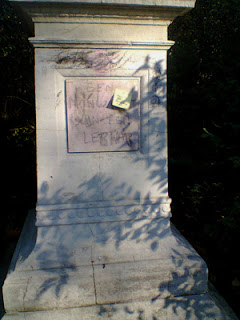 Promissory notes / Copers sokkel
As is Leo Copers’ uncompromising intervention on the empty plinth in the city park... here too avoiding the pitfall to produce something to go on it: just a note to say, well, back in a tick, gone fishing or whatever... and keeping it going, for it has now been quite a while that I have seen various post-its... surmising it is not he himself posting them, and can imagine not even someone with the brief to do so, but just anyone too... which undermines authorship, authenticity and authority all at the same time...
Quite a bit of digging going on lately!

(* seems Nabakov reminds us that the translation of Dostoyevsky’s novella is wrong, and should refer to letters under the floorboards, somewhere near the mouse-hole entrance to some underground labyrinth to be sure, but not mentioned specifically)
Gepost door bureau gruzemayerblogB op 06:28 Geen opmerkingen: