We got there just in time. When we entered the Nucleo in Ghent we saw that there was a performance by Karin Vyncke beginning at three... so we rushed the doors and were admitted just in the nick of time. It was a silent chamber-piece, well, literal reading of objects and their changes, presented by the artist in a pair of dust-sleeves... in a library full of empty shelves. Table, chair, and written attributes on folded card. Still life, from fruity cornucopia to hunting scene to memento mori, vanitas, and back to tea-time... all whipped from a signatory folder with a certain theatrical flair, steps just short of dance, flowing though, so that the visual narrative was easy to follow. We were like children awaiting the next line in an exciting tale going nowhere... small comic notes, lots of room for interpretation and imagery in one’s own mind’s eye... but still her story: we had to follow, no matter how absurd or surreal, and in the end, it is she the dog squashed, we the pineapple turned pheasant... pool of water becoming blood. 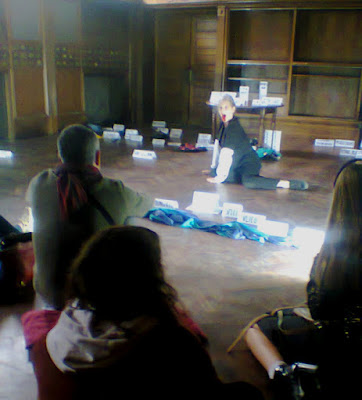 (the performer as a young dog- in fact, I couldn’t help thinking of a possible mute version of ‘Evelyn, the modified dog...’ (Hark! She said...)

Very good. Very glad we were able to be there. Special moment and just right in between the usual fare – neither here nor there, just skirting and leaning back before becoming one thing or the other, as mentioned not quite theatre, dance perf of tableau-vivante, panto and Bhutto, storyboard charades... very nice balancing act.

We could hear the calls though the door. We didn’t know what it was, but once outside the library we could see the two women balancing on their heels on their chairs and calling into the high ceiling... controlled howls. Stepping down they (Maria Degrève and Lieve D’hondt) would continue their own ways. A side room gave clues but no more... a version I had not yet encountered – the version I knew was the office version. This one more of an oracle, more mystery, more fitting to the venue...

You’d think they would go unnoticed but no: I knew them too well to pretend not to see them and walk past... especially since I came specially... ah to what purpose, that is the question. Ieke Trinks was doing nothing. She wasn’t participating, she wasn’t even really there, sort of absent-minded it seemed, in another world, sitting reading something completely unrelated... she even said she was doing nothing... I had asked “what have you been doing of late”, or currently or when’s the next whatever... noting... neither here nor there... But I was intrigued, having been on art-strike for a while now (... the second call by Stewart Home... too young for the first one by Metzger you know) and a virulent supporter of non-art... even though I have a feeble character and no self-discipline whatsoever... that’s why I find myself visiting these sorts of artistic venues... so I wanted to know... to find a kindred spirit, a good reason for being as I am... but alas, nothing, nope, nix – I called her refusenik, nihilist... but she didn’t mind... it didn’t seem to faze her at all to be excommunicated from the hallowed halls of corporate & corporeal art-doo... she just shook her head.

Frans van Lent on the other hand, was a man with a mission... what mission I still don’t know, but he’s very good at it: in this instance he packaged his nonconformist stance in a very conformist format: the book presentation. (the day before, by way of contribution, he had made a double/two video, showing himself and his other, being a video by some selected volunteer, so than now there were two videos unrelated but correlated, showing himself as being followed by a videàste, another of his own making, and exchanging between the takes cameras and such to have two closely unrelated videos, presenting side by side (in their respective adapters) two diverging videos made in separated tandem as it were... hmm – anything but parallel I would say, interweaving timeframe and direction of travel as to have double takes coinciding where in reality no interaction should take place. 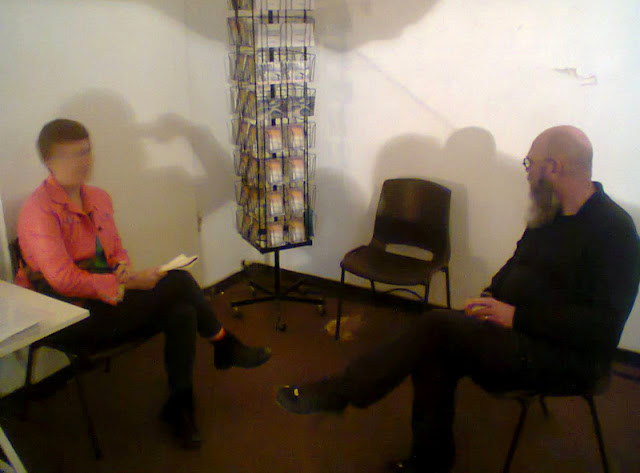 (Ieke T. refusing to have her portrait taken by shaking her head vigorously while Fransiscus v.L. just plain looks away... the ominous silhouette of the photographer apparent, while a dark cloud hangs over the scene)

In the same space as were the two umbrellas (brollies- I think that’s the plural – by Kimvi) serving as reference to Magritte’s rain-men dancing down from the clouds, or rather bowlers, since in fact René didn’t use that many brollies – but they do have that sewing machine connotation that can hazard anyone’s guess at that. I must admit I didn’t see them go up or down... so will have to use my imagination. 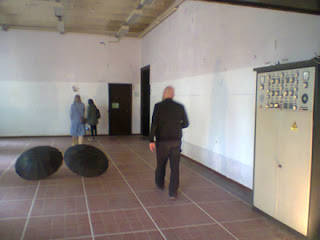 (FvL on his way to aid two visitors watching the two videos in the room with the two umbrellas...)

Sabine, who uses the seventies penchant for general minuscule writing of names oosterlynck (org) had a sale, or rather sale after sale, in which one has to re-price all the items in the store every time... in this case a flurry of stickers on one item: the artist herself... or serially sticking stickers prices-stickers that is, those little buggers that are conceived specially to not be removed by delinquent children or penny-pinching grandmothers... the one’s they like to slap on your priceless antique just on the very spot the varnish is at it’s most fragile, or the image on the cover of your vintage book most interesting... since they made it mechanical people can’t get enough of them... whatever happened to the good old price tag, one that would dangle freely, and could be snipped off in a jiffy...

Freddy K had a nice little (or rather large) pup tent going, one you could crawl into and participate in the goings-on in there... which I refrained from doing, but sort of liked the idea of being a mental voyeur considering all the things that might be going on behind the blankets suspended from walls and ceiling... straps and stuff... ooh, even clothes pegs if you know what I mean... and tied in exotic knots and things...

13 years of Hysteria was a bit of fun if it wasn’t your own lot: here you could give it a go in a distance fight: mechanical dolls manipulated by you and your partner so as to avoid real injury... quite an elaborate surrogate activity (the mechanics alone!) but quite effective... Stephanie Van de Velde (whom I haven’t seen for ages) and Joost Pauwaert did it, and they did it good... even though ‘her’ head came loose a bit too easy... but also easily knocked back with the help of an iron rod. 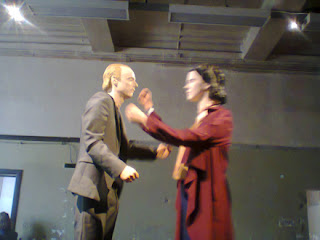 (surrogate punch-up as alternative to domestic violence... good idea and less of a burden on local policing)

Talk about shoe fetish! Johanna Van Overmeir seems to have it good, traveling all the way to Minsk (or was it St.Petersberg?) to saunter through the local flea market in search of the right pair of shoes to envelop in plastic and pour some gooey waxy stuff in them and exhibit them in a suitcase by the door... pilgrims progress arrested, belief suspended, family voyage interrupted.

Tone down the edge of an itchy stone was the title of a performance by Liesje van den berk which we missed but could see the remnants of sandpaper and brick/stone dust on the floor, writing as far as i could make out nowhere... and in the room right at back a chair and three snaps of a drooling mouth performance by Natalie Fyfe, who has already gone... but I must admit I was intrigued by the remnants of ‘nit by mouth’.

But back to Van Lent: rounding up proceedings somewhat with the aforementioned classic format of book presentation he explained and read aloud from the book i question, a compilation of reports from the ‘Parallel show’ series of interventions in museums all over... unnoticed or hardly noticed interventions which had caught my attention while trying to disappear during one of the unnoticed festivals (in Nijmegen, noticeably) – and, though I did not participate per sé, did follow on the website and even managed to show up for a few minutes during the grande finale (see earlier blog)... so here in book form – asking myself why would I want to burden my overloaded library with yet another tome containing text I had already read... why enlighten further my meagre wallet for an edition with no pictures to look at (well, an insert for the hard-up eye-candy-canes) Why would I want to repeat myself and exercise my right to superfluous behaviour and material hoarding...  usually I am very frugal and avoid unnecessary displacements and the acquisition of excess ballast... but this was just one of those things I wanted to have... 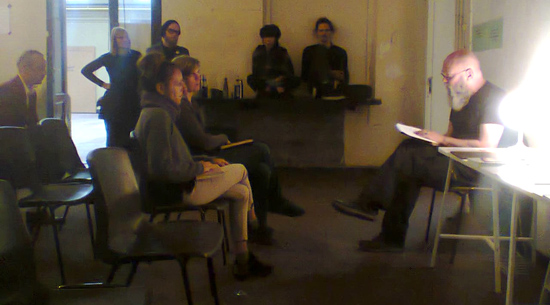 Gotta havvit!
A bit like a shopping nun who had been locked up in the cloisters for years on end and now finally was able to tear loose with the credit card of her bishop and landed in the sparkly world of Prada and Chanel... after all those years of sticky ointment! Just 19,99 at an outlet near you!


(talk about stereotyping! Could also consider as the bishop himself on a spree of beatific hysteria - bit strange that illustration, but perhaps brought about by the venue- a former catholic school where who knows what went on,....  and the long beard worn by the artist reminding rather of a trappist monk or missionary out in the African boonies saving souls... who nose?) 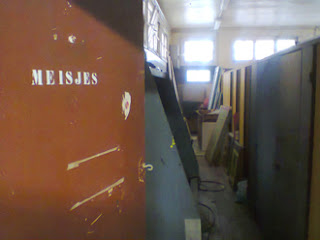