Gruzemayer is helping to realise

….associations of sorts,
a three-part quick-fix exhibition series with work by Jef Lambrecht, founder of the Belgian Institute for World Affairs (with Karel Schoetens) the Saint Nicholas Chapter and various departments including EAR… known by the wider belgian public as radio journalist specialising in middel eastern affairs and freelance commentator on the arts.

a dive into the archives, basement, attic, rifling through the shelves… an attempt to give an impression of artistic activities from the early stages until fairly recently…  say 1980-2000) omitting a large section in which JL was busy mainly with writing books on the situation in the arab world, concentrating of travel and research, and participating only sporadically in artistic situations.

A small show in the museum of contemporary art in Antwerp, the MuHKA comprises an attempted overview INBOX and three larger works in the forum space on the second floor, as well as an evening of never seen rushes at the nearby CinemaZuid on the 18th of may at 19:30
see relevant websites for details… 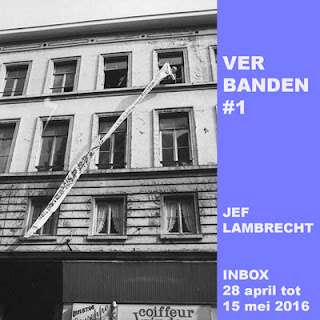 part 2
next up is an occupation of the Orbino container-space in the Middleheimmuseum Antwerp, Open air sculpture park… from 19th may to 6th of june 2016…
here spoken, written painted word will be the main theme…


will take place in the ‘Poortgebouw’ opposite LLS 387 contemporary art space, with larg-scale works and most recent drawings, among other things… from the 29th of may to june 26
Gepost door bureau gruzemayerblogB op 03:55 Geen opmerkingen: