Well, it’s been a long time but finally Heini got to Berlin… born before the wall went up and now, long after it’s gone, come to have a look-see. Another aspect was this story of having been registered in Berlin at time of birth, it still being a military section-zone at the time… but it seems there is no record of it, and as such just a ruse. In any case I thought it might be appropriate to prepare my contribution to the ELAA performance fest ‘second’ in German… and it made for an interesting train of thought (I find thoughts travel differently in German..) As it happened, it was all in English… which sort of threw me, because the basic trajectory was a German one and now I ended up on a different set of rails leading somewhere close to the middle of nowhere… fine by me, and the whole thing has more of a Eurosceptic ring to it than originally intended… Essentially a short introduction into the manner of the European commission, and resulting in a sort of inedible Maccedoine soup in a dog-bone broth… held up by lashings of gelatin and wire… common garden variety as well as galvanized. 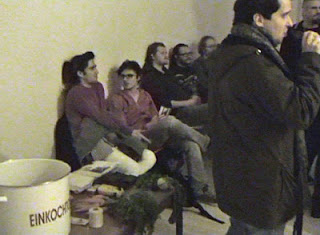 Attempts to get the populace moving proved futile, perhaps Berliners don’t like to get told what to do any more… and so it was also difficult to engage them in a poï-poï style greet & role play… to say not at all thank you. But the initiation did break a rather hushed silence which befell the situation during the first part of the evening… and so it was a sort of successful mess… especially since the soup never could stand on it’s own… as far as I know, ( have not yet heard the report from the second half of the festival)